skip to main | skip to sidebar

Back to the Smörgåsbord

We're feeling a bit dizzy and disoriented here at Nomadicity, having spent the last few months alternating between long, intense days at the office and relaxing holidays around the Mediterranean, watching the Republicans and the global financial system implode, visiting new places and meeting new people, and having the opportunity to hang out with old friends in familiar surroundings at home in Stockholm. So I felt it was time for another Nomadicity Smörgåsbord Post™, in which we bounce randomly from one topic to another in an unbalanced, intoxicated manner that I hope is as intriguing as it is irritating. It may help to pour yourself a glass or two before reading – God knows I plan to imbibe a bit while writing.

Let me begin with a Smörgåsbord Post™ tradition by sharing with you another interview by John Oliver of the Daily Show:

But Nomadicity's pandering to the masses doesn't end with an embedded video or two – in response to demand from our many semi-literate visitors, I am pleased to be able to dispense with our obligation to provide an update on our recent holiday travels around the eastern Mediterranean, Slovakia, Austria and Switzerland by borrowing a tradition from EuroNews by posting a dozen or so photo highlights from our travels with "no comment." 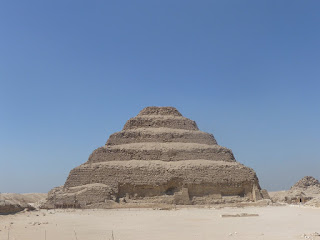 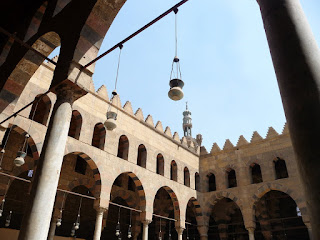 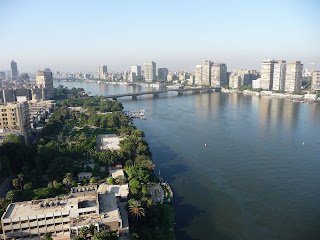 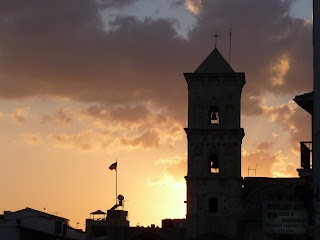 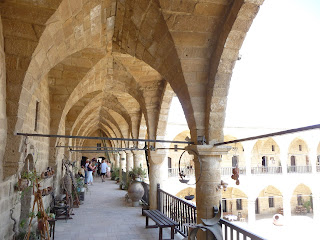 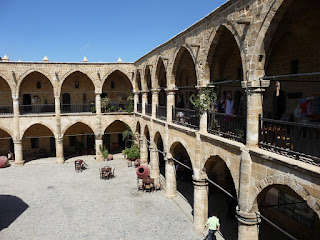 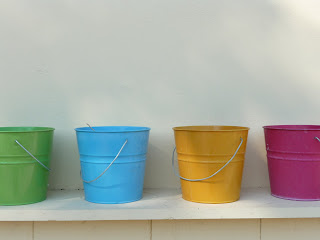 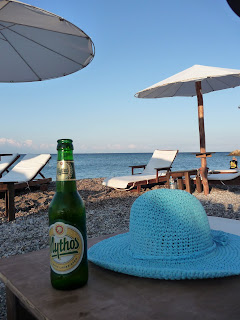 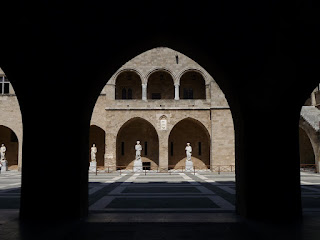 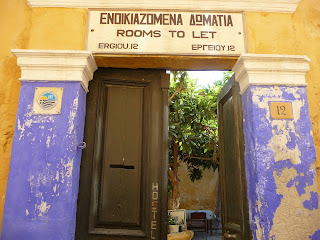 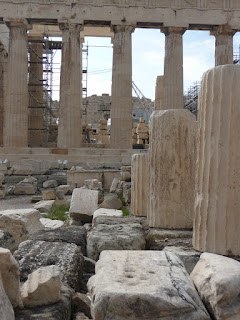 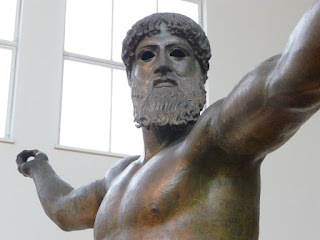 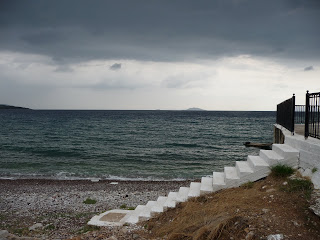 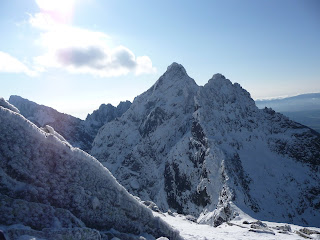 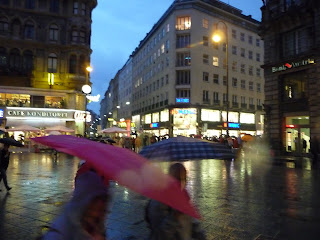 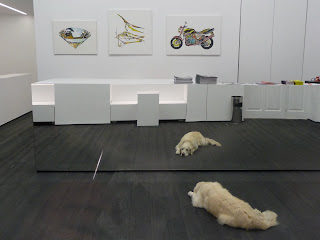 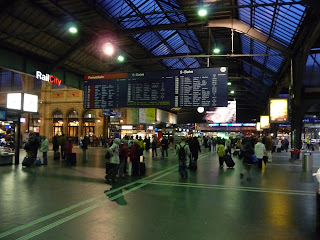 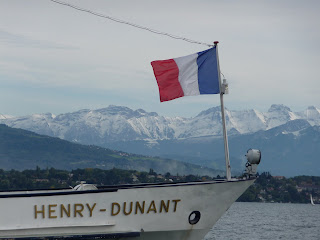 As a card-carrying member of the international digerati, being out of town didn't mean I was out of touch, and between surfing at hot spots and listening to BBC News podcasts, I was able to remain plugged into the 24/7 news cycle and didn't miss any of the numerous dramatic news stories that emerged during my travels, including the breathlessly delivered report that the start-up of the Large Hadron Collider did not create a massive black hole that swallowed the earth and most of the rest of the solar system, as a number of home-schooled conservatives expected it to. I was also able to watch Sarah Palin attempt to persuade voters that she was an better candidate for public office than Joe Biden by demonstrating that she was even more common and ordinary than George Bush, yet more paranoid and vicious than Dick Cheney, and of course to watch the cumulative effects of 8 years of Bush economic policy play out in the financial markets.

The Bush "bailout" package – a piece of legislation that caps his years' of effort to introduce communism to America – is the perfect complement to his earlier initiatives to develop gulags, torture programmes, disinformation and propaganda campaigns, and a party-loyalty based approach to managing the federal bureaucracy. Now, with the introduction of a planned economy, the transition is complete.

Sarah Palin was enthusiastic in her endorsement – "We need to make sure that we demand from the federal government strict oversight of those entities in charge of our investments and our savings" she said, and noted that "there was greed and there is corruption on Wall Street. And we need to stop that". Such talk might have won over a Socialist like myself, except that – secure in the knowledge that the morons that she and Bush call their "base" would never be bright enough to notice the difference – she promptly contradicted herself by revealing herself to be an unreformed advocate of liberal economics by declaring that "I do take issue with some of the principle there with that redistribution of wealth principle " and talked directly to bad, evil, banking-and-financial-system-regulating government by saying: "government, you know, you're not always the solution. In fact, too often you're the problem so, government, lessen the tax burden and on our families and get out of the way and let the private sector and our families grow and thrive and prosper".

This is of course, precisely the mentality that got us into this mess in the first place. It all started with a repulsive little man named Ronald Reagan, who was the first politician to discover the previously untapped power of the now-critical moron voting bloc by declaring that "The nine most terrifying words in the English language are: 'I'm from the government and I'm here to help.'" His ideological successor, George Bush, turned that ignorant statement into official policy by ensuring that no one in New Orleans ever heard anyone utter such terrifying words in the days following Hurricane Katrina. Those suffering from unemployment, lack of health insurance, or abusive lending practices have been similarly celebrating the absence of any official meddling with capitalism's unrestrained orgy of abuse during the Bush years. Those who want the party to continue will of course be voting McCain-Palin. Those of us who believe that wealth should bubble up from the masses, rather than trickling down from the capitalists, won't.

But let me conclude by counting a few of my many blessings. Doha is a much more liveable place than the one I left a few weeks ago -- the temperature has dropped substantially, Ramadan is over, and the bars are open again. All of my savings are in cash and gold. I don't have a mortgage or own real estate in the USA, the UK or Spain. So far, the Gulf is unaffected by the financial storms sweeping the rest of the world, and my job is secure. Barack Hussein Obama is all but certain to be the next President of the United States. With the exception of the fact that Britney has just released a new album, life is pretty good.

Nomadicity brings enlightenment to the ignorant, clarity to the confused, empowerment to the dispossessed, healing to the wounded, hope to the downtrodden, drink to the thirsty, redemption to the damned, and grace to the awkward through a unique combination of primary field research, stringently fact-based deductive reasoning interpreted through the twin prisms of the Marxist dialectic and Buddhist philosophy (with the occaisional Roman Catholic influence) and our secret blend of 11 mediterranean herbs and spices. Hypocrisy, racism, xenophobia, capitalism, creationism, mediocrity, and polygamy are rejected as fundamentally flawed; cash donations are however accepted with gratitude and humility as long as no reciprocal obligations beyond the raising of a toast to our patron's health are incurred.

Recipes for food, cocktails or improvised explosive devices (IEDs); sex techniques, dating strategies or contraceptive devices (IUDs); advice concerning equity, debt and short-term capital instruments (IOUs); driving directions, first aid information, foreign language phrases, legal advice, self-defence manœuvers, hotel and restaurant recommendations, style, fashion, or interior decorating hints; business, marketing, gambling or fund-raising strategies and any other information provided by Nomadicity are given on a good-faith, best-effort basis and are believed to be accurate and effective at the time of posting; however, none have been previously tested on animals and Nomadicity can accept no liability for any consequences; reader discretion is advised.

Chat with me on Skype:

The Dark Side by Jane Mayer

The Post-American World by Fareed Zakaria

Microcosm: Portrait of a Central European City by Norman Davies and Roger Moorehouse

Bush's Law: The Remaking of American Justice by Eric Lichtblau

Failed States: The Abuse of Power and the Assault on Democracy by Noam Chomsky

Harry Potter and the Deathly Hallows by J.K. Rowling

Oath Betrayed: Torture, Medical Complicity, and the War on Terror by Steven Miles

God's Playground: A History of Poland by Norman Davies